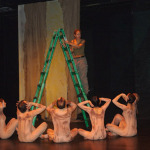 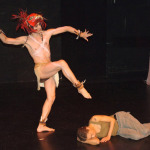 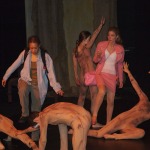 In Spring 2006, MultiStages produced Knowing Bliss by Arden Kass, Directed by Artistic Director Lorca Peress at Teatro La Tea.  MultiStages was invited to perform the play in the Theatre for the New City’s Lower Eastside Festival. This complex piece takes us on an emotional journey between an estranged African-American Anthropologist and her Caucasian actress mother as they visit the Anasazi Cliff dwellings. MultiStages brought in dancers to create the landscape, a shape-shifting Coyote, and memories of the Anasazi people, as well as Music, Video and Mask Design.