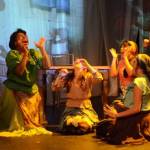 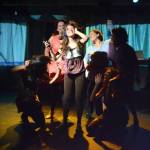 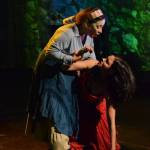 In Fall of 2012, MultiStages produced “The Island of No Tomorrows” by Fengar Gael, with Original Music arranged and recorded by Anika Paris, Songs composed by N.B. Reade, Lyrics by Fengar Gael. Co-Production with Interart Development Series. This new work is not your traditional musical. The infant Esperanza’s mother dies in

childbirth, and Esperanza is given an artificial heart but not expected to live. Her father, Don Hilardo, sequesters Esperanza at Villa Leche, his ideal of heaven on earth, filled with a bevy of voluptuous nursing mothers to care for her until the dreaded day arrives. But Esperanza defies the odds in this madcap exploration of sexual subjugation, political oppression, and the challenges of parenting in the electronic age.